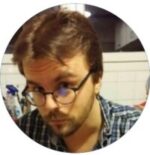 Jérôme is a PhD student at the University of Montpellier working on intra-patient evolution of viruses in the case of chronic infections (co-supervisor: Samuel Alizon).

Chronic infections are processes in dynamic and metastable equilibrium.  This project focuses on two such chronic infections: recurrent respiratory papillomatosis (RRP) and polyomavirus-associated nephropathy (PVAN). Infections by Papillomaviruses and Polyomaviruses are common and most often asymptomatic in humans. However, both for RRP and PVAN, host*virus*environment interactions lead to intrapatient accumulation of viral mutations, concurring with lung cancer metastases and transplant failure, respectively. For both diseases intrapatient generation of viral diversity correlates with disease severity, and the infection is an epidemiological “dead end” for the virus. We hypothesise that intrapatient natural selection of viral genomic changes dramatically influences the natural history of the infection.

This is a fundamentally interdisciplinar PhD Thesis project. It will involve the generation of time-stamped descriptions of viral diversity with an unprecedented depth, and the reconstruction of intrapatient viral evolution. We will further develop mathematical models of intrapatient viral evolution to identify shifts in the natural history of the disease that can help early detection of patients at risk of transplant failure or of lung metastases.

In parallel, a new index to calculate Codon Usage Preferencies in a gene, named COUSIN for COdon Usage Similarity INdex, has been created. This index has the advantage to display precise results that can easily be interpreted quantitatively and qualitatively. A new eponym tool has been created to allow analysis of CUPrefs thanks to COUSIN and other indexes.